I haven't been writing for almost 2 years. There are so money things happened in my life the last few years that I couldn't really catch the reality anymore.
Lost one of the closest human beings that I had during my short life.
I couldn't concentrate very much on paintings. I have been travelling a lot and hadn't really a place to paint. I moved from Devon to Cornwall. I had to leave the most beautiful place on this planet, maybe it is not the entire truth. But definitely, Dunchideock and the garden of Lyalls Cottage belong to the most outstanding place in Devon. I am still mourning. 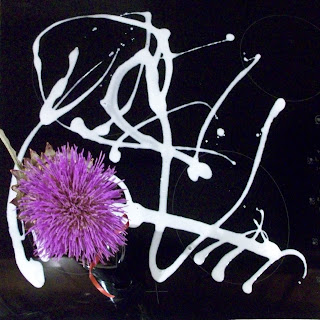 Posted by KasiaTurajczyk at 12:13 No comments:

From Cowboys to Astronauts - exhbition from waste material

"I’ve often heard people say: ‘I wonder what it would feel like to be on board a spaceship,’ and the answer is very simple. What does it feel like? That’s all we have ever experienced. We are all astronauts on a little spaceship called Earth." -R. Buckminster Fuller

I am taking part in an exhibition entitled From Cowboys to Astronauts. It takes place at The Enviro Hub, Devon Contract Waste inExeter; from Monday April 20 till May, 24 2015.
We, the artist from Devon, are presenting objects, installations, visual art etc made from waste. The meaning of it is to  promoting the concept of a circular economy – a regenerative economic system where materials and energy from products are recovered and put back into the system instead of simply being disposed of.
The initiative for this exhibition came from Centre for Alternative Materials andRemanufacturing Technologies (CALMARE), a business technology centre, part funded by the ERDF, based at the University of Exeter. The waste materials used in the exhibition have been sourced from the University itself, from the private 'collections' of artists and from other locations around Devon, including Exeter and Plymouth Scrapstores, Peninsula Waste Savers in Okehampton and the Devon County Council landfill sites managed by SITA.
On Saturday 2nd May, there will be a Family Day, where you will get the chance to use recycled materials yourselves, in children’s workshops run by artists taking part in the exhibition.
Meet the Artist days on Saturday 9th and 16th May will give the public an opportunity to talk to some of the artist exhibiting and find out more about their work.


Entry to the exhibition is free, and it is open to the public from Monday to Saturday, excluding bank holidays, until the final Friday, May 22nd 2015.
Today, Tuesday, 28th we are having a private view at 8.30 pm.
I will make photos of my paper installation and of the objects of other artist. Tomorrow I will make a post bassed of my impression from this exhibiton.

Here are some images of my installation One Month's Fortune! 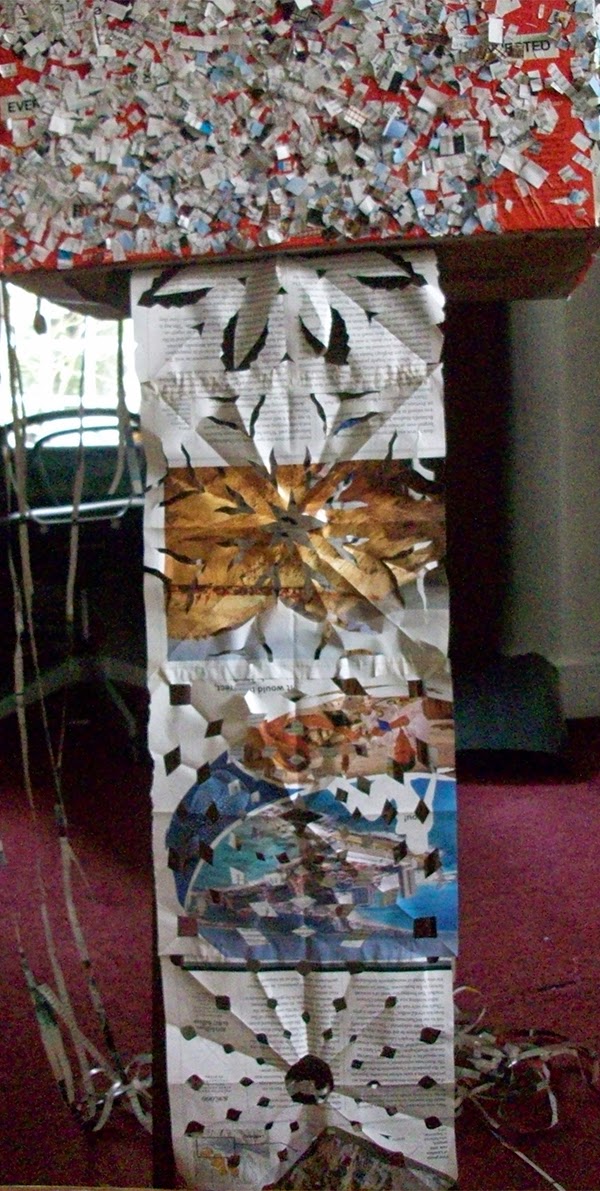 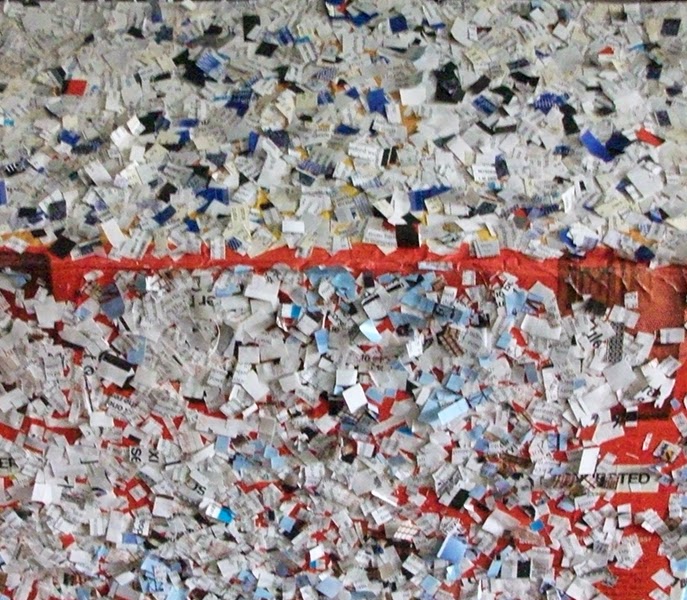 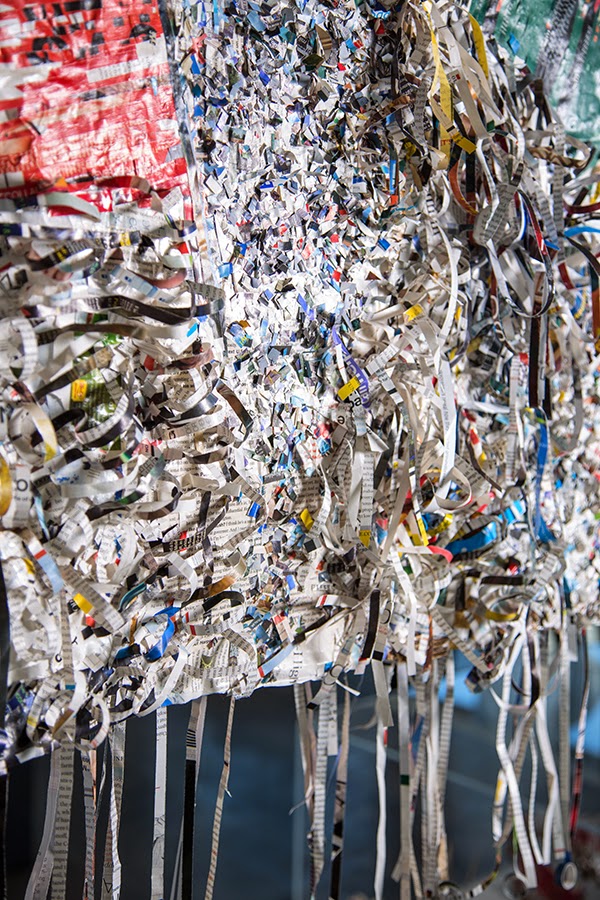 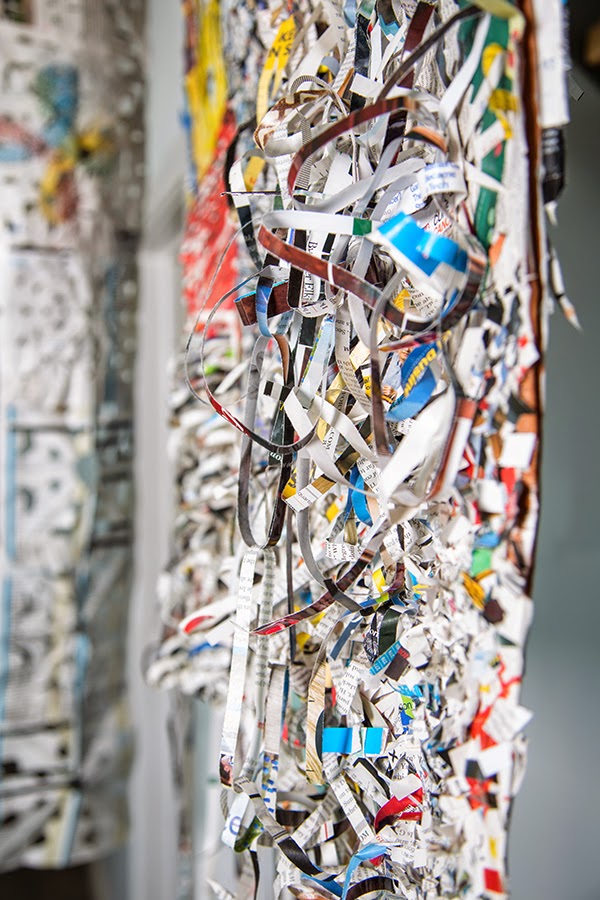 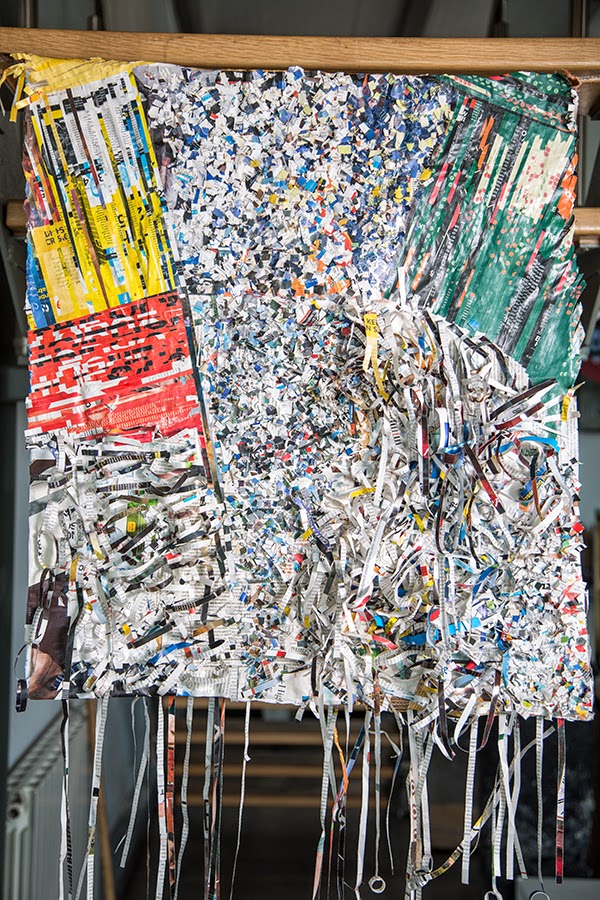 Posted by KasiaTurajczyk at 07:55 No comments:

The escape from the loony bin of life!

My devotion to Pinocchio is not a secret. I have always loved the character from the book by Carlo Collodi, I loved Disney's Pinocchio, I love the Russian Pinocchio and I love my two Pinocchio toys.

They have travelled with me around the world; they are very old and wise. Made in Russia, they came from Russia to me. They are old, probably 50 and 45 years old. They are aging, one of them has lost his hair, and unfortunately also his nose.

Since I was introduced to Pinocchio's character I have always been painting and drawing this wonderful marionette.  Pinocchio willy-nilly was becoming a hero of my work.

My first portrait of Pinocchio I made in oil on canvas;  very expressionistic, with fat, large strokes of brush paint.  It is kind of a dark painting. The next was lighter, brighter, finer, with spell of impressionistic touch.  The series Return of Peter Pan also has a Pinocchio theme. Two brothers
sitting close to each other and talking.


Last year I made another painting with Pinocchios in it. It is a very interesting painting in my humble opinion. I had an urge to paint a huge Pinocchio. I thought I would make him lean forward. I sketched him on a large canvas using thinned  oil paint.  Then I made very quickly a small sketchy painting on a small canvas. The space of the rectangular canvas was full of creatures and children. They were marching and holding banners and flags. They were protesting, they wanted to be free, free from all the rubbish and nonsense of adulthood.
The night after I didn't sleep and thought about that painting. A totally new idea was born in my brain, still with the huge Pinocchio as a predominant element in.  I imagined a Merry-go-round, some beautiful wooden horses and my children and a few toys riding them.  A carousel as a loony bin of life. The children and the toys they want to escape from this madness. Pinocchios as wise men would help them to achieve it.  They should rescue the children from the loony bin of our life.

Posted by KasiaTurajczyk at 12:44 No comments:

“When I examine myself and my methods of thought, I come to the conclusion that the gift of fantasy has meant more to me than any talent for abstract, positive thinking. ”

The Polish Fairy Tale - New painting from my new series Phantasmagoria
It is a fairy tale about a Caterina di Barche, a daughter of a Polish prince from the Piast dynasty and a Tuscans princess from Siena.

Once upon a time at the lands of the kingdom of Malopolska lived a princess named Caterina di Barche. The locals called her Delight… 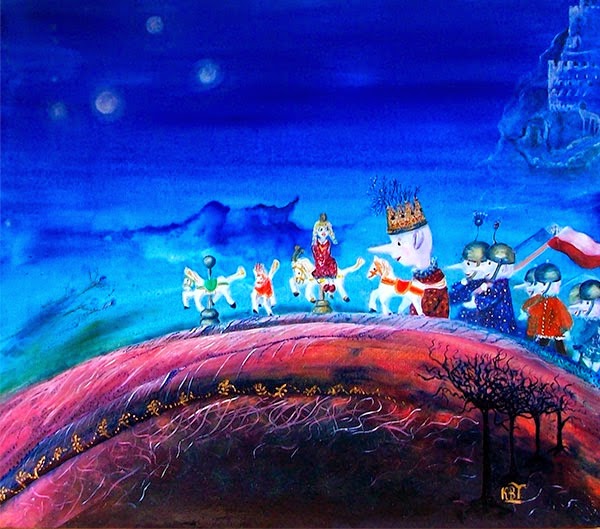 Posted by KasiaTurajczyk at 07:33 No comments:

Structures Implicated - the texture in abstract.

My new abstract. It is a real pleasure to experiment and play with adding textures to an oil painting. First the oil paints, added in different thicknesses and in different ways (brushes and pallet knifes). After that the fun of making textures. I used little, tiny sticks, pallet knifes and pins. The variety of textures you can achieve is amazing. It is never too late to learn new things. I am pleased with the end product.

The beautiful, the sacred and the contemporary art

It is an open secret that contemporary art has lost its connection to beauty and the sacred. Another very important aspect is the craftsmanship. A huge percentage of contemporary art colleges' students and contemporary artists can’t draw or paint. The only thing that they are able to do is to express their own ideas or feelings. There is no beauty in most of the products of art and the sacred element is missing.


On the other hand XX/XXI century art was/is an act of expression, so perhaps I am wrong. Maybe contemporary art is the expression of contemporary people who have lost any connection with the beautiful and the sacred?! Maybe they may not need these aesthetical and ethical sentiments from the past. Mass culture, popular culture, deception, profit, popularity and selfishness. The flow of information is so overwhelming - we don't have time for deep study or reflection. It is about sloppiness and dullness. That is a good characterisation of XXI century art: asexual and shallow.

Sometimes I think that one of the last bastions of excellent technique, beauty and the sacred are the surreal artists, and of course the practitioners of traditional fine art too.

Posted by KasiaTurajczyk at 02:22 No comments:

Count not that as yours which fortune has made yours.   For Niels Bohr

If I were born like you in cold Denmark

Except that Burma became British,)

Would I have discovered the atom like you did?

The connection you established between the quantum theory of Planck

and the atomic theory of Thomson and Rutherford?

Or would I have wandered through the streets of Cambridge,

In my mind the verses of Morris

From The Life and Death of Jason

"Dreamer of dreams, born out of due time,

Why should I strive to set the crooked straight"

How would I find the Victorian Empire, the height of hypocrisy,

The death of Oscar Wilde, the tales from your fellow countryman?

What would I do in that most inspiring period at the beginning of the XX century?

The development of electricity, the cinema, the automobile, the telephone.

But also the First World War and later on World War II.

Did you, like me, lose many relatives in the euphemism of racial supremacy?

Would I have, like you, run away from the Nazi madness?

Would I have had enough time to work on the discovery of the atomic structure?

Or would I have decided to be W.B. Yeats? 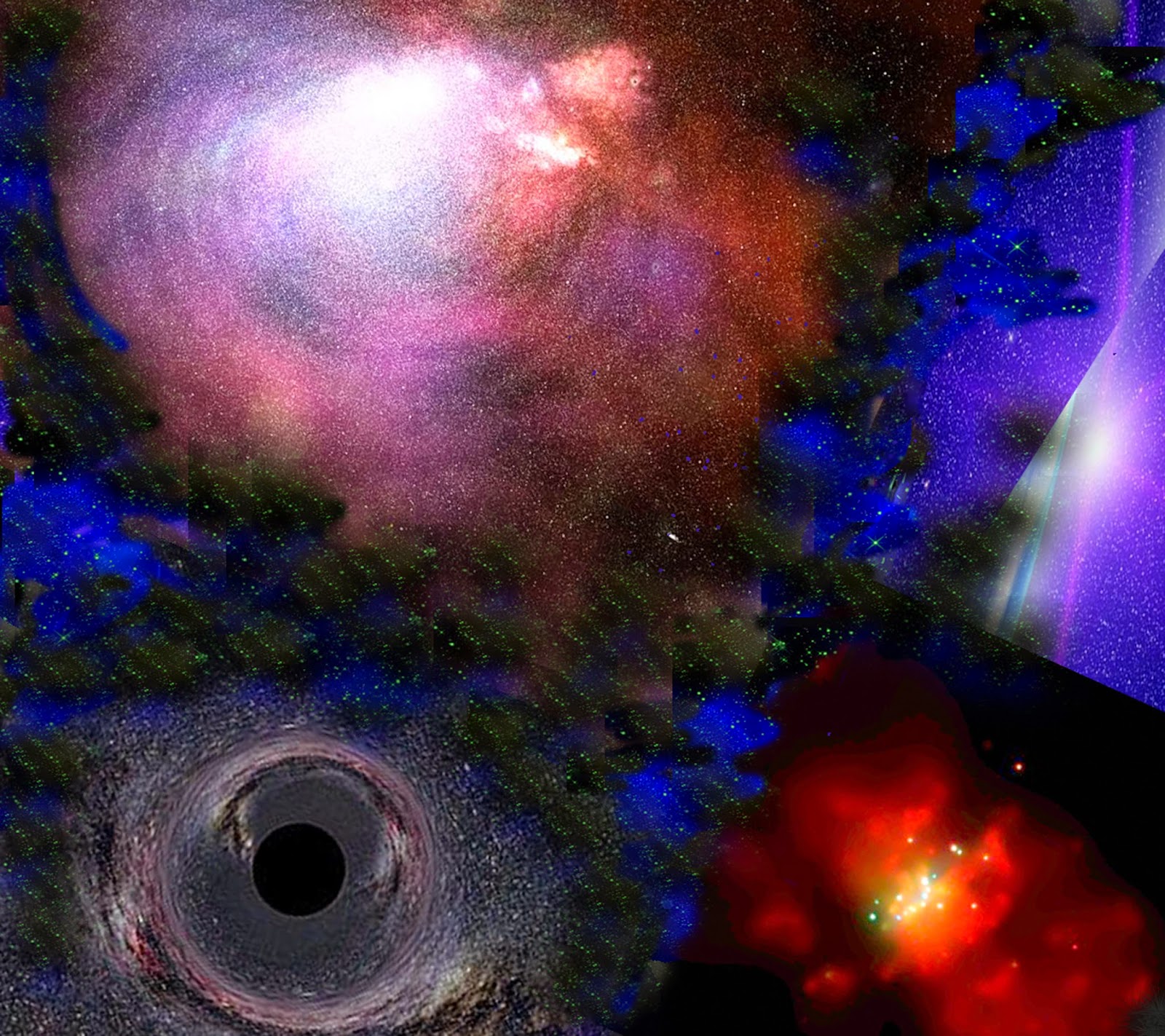 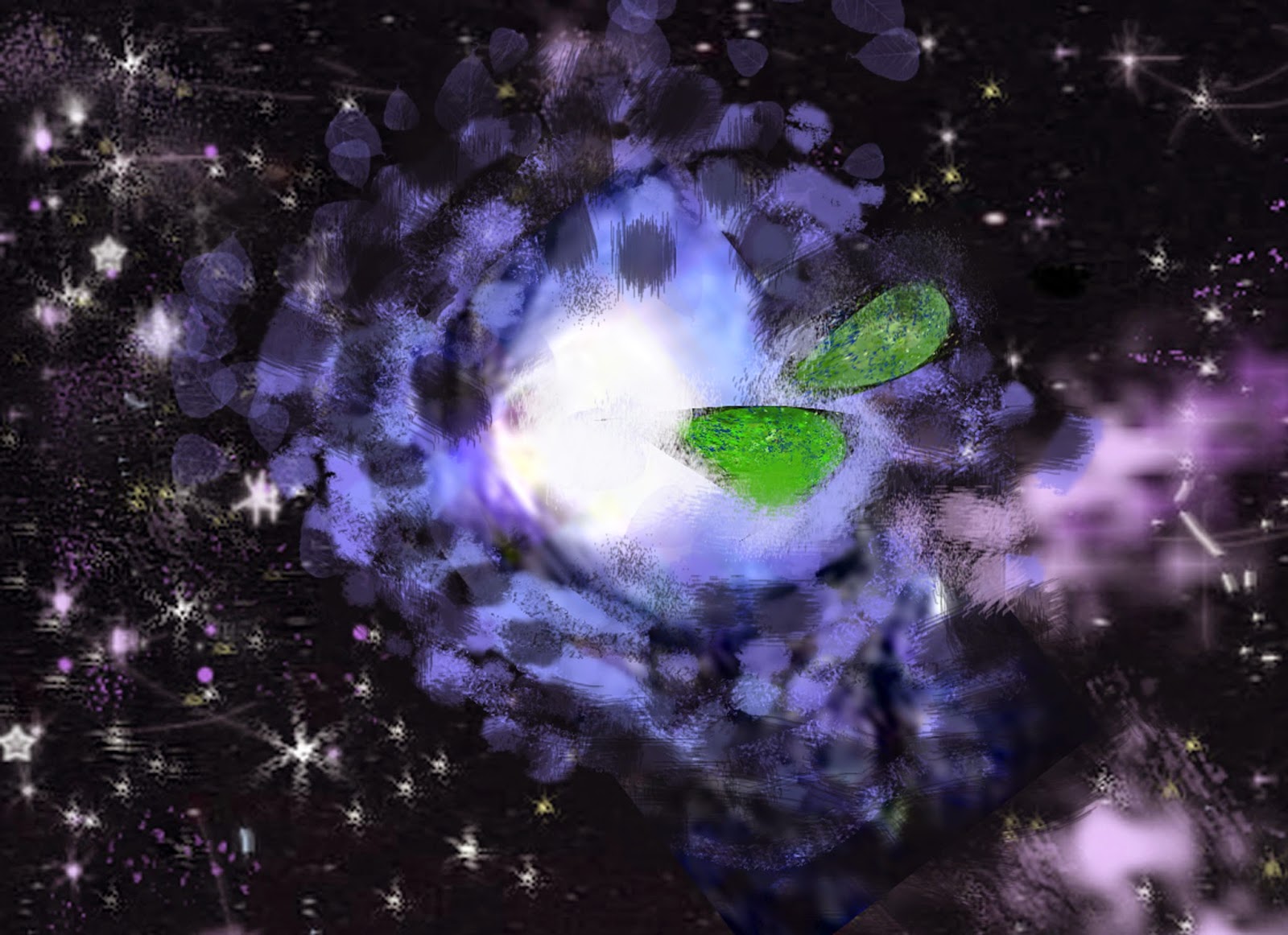 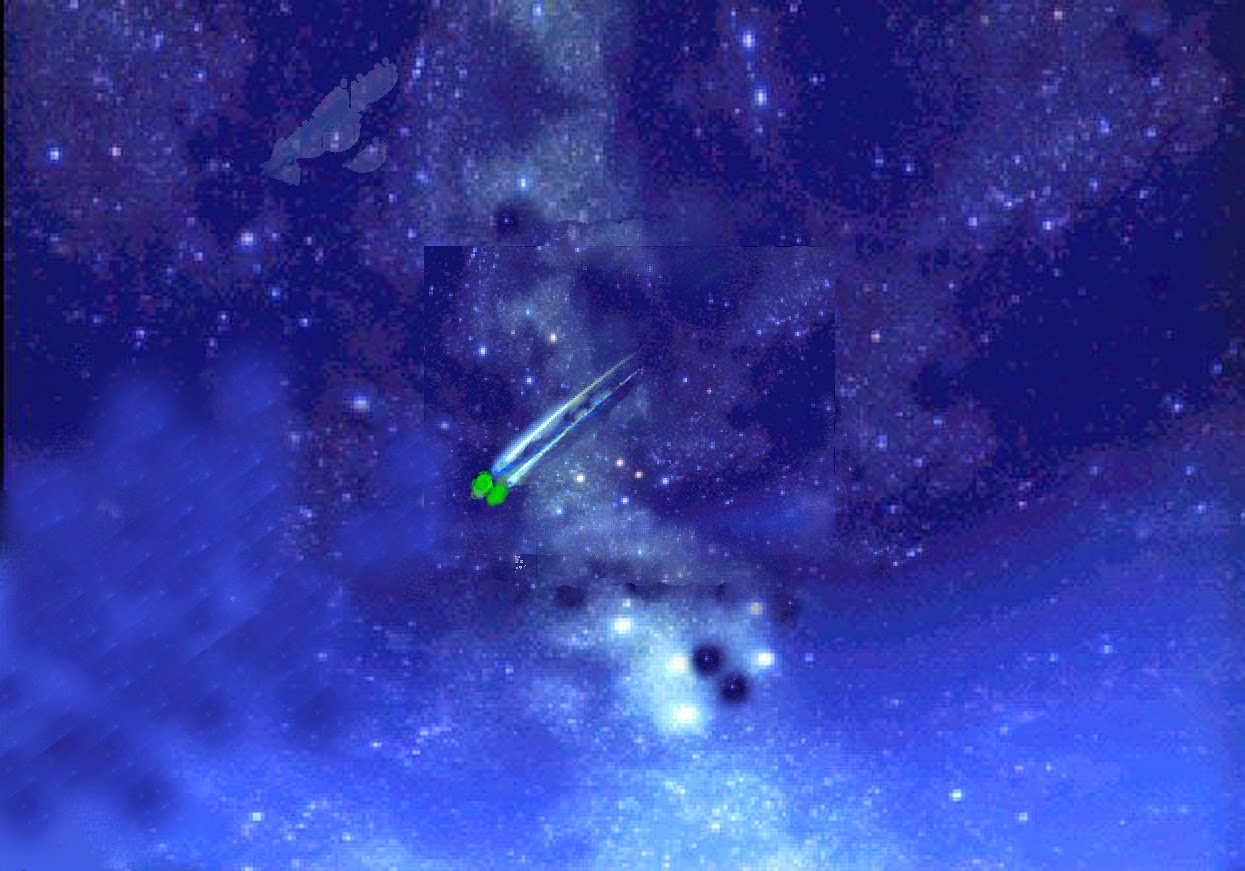 By kasia b. turajczyk
Posted by KasiaTurajczyk at 14:37 No comments:

All the text, images and other content being part of this Blog, excepting the theme(s), is property of the Author, unless noted otherwise. All logos and trademarks are property of their respective owners. You are free to copy, distribute, display, and perform the written contents of this of this Blog under the terms of the Creative Commons. You are welcome to link to this blog, and to discuss its contents in a respectful manner. You are not authorized to use this content for personal profit. Whenever copyrighted material is mentioned or used, the Author is doing so according to fair usage practices. Use of material from this Blog according to fair usage practices requires proper acknowledgement. Simply linking back to the Blog is not considered proper acknowledgement; please provide a link including the Author’s name, the name of the page you are linking, and a permanent link (”Permalink“) to that page.